There are many color morphs, the only ones occurring in the wild are Red, Silver, and Cross phases. However, in captivity, there have been many variations. See below for more info.
Red Foxes blow their coat once a year, and have shorter fur during the summer while growing dense, soft fur for the winter. In captivity, they live an average of 14 years, but in the wild, they only live an average of 2 years.

Social Behavior/Temperament: Red foxes are generally deemed as a one person fox. However, there have been rare cases, if properly socialized, where the fox will be accustomed to meeting new people and pets. Reds should never be left unsupervised with any animal, as their behavior can change with the snap of their moods. The best comparison of a Red Fox is to a toddler in the 'terrible twos' stage, except the red fox will be in it their whole life.
They aren't interested in pleasing you like a dog would be; they are more independent like a cat where they do what they want when they want. Out of the two, Reds and Arctic foxes, Red foxes are more catlike - aloof, independent, love to climb, and antisocial.
​However, they can be trained to use a litter box with almost a 100% success rate, after much devotion, and they can be taught tricks, like dogs. The key is that they are treat and food motivated, more like a cat. Praise alone does not work with training. It is not uncommon to see Red Foxes that can be walked on a leash like a dog, and taught similar commands (with extremely dedicated owners).
Red Foxes are said to be one of the smelliest foxes as well as Arctics. They utilize urine and scat to mark territory, food, and toys. They also have anal scent glands that can be let out if scared, similar to a skunk, or a domestic canine's anal glands.
Range: Red foxes are the most widespread fox on the planet, and this is due to their ability to adapt to almost any environment. While not native to each continent, humans used to introduce them for hunting. In some continents such as Australia, they are considered invasive wildlife and a nuisance. They can survive in dense woods, city areas, and even freezing climates. 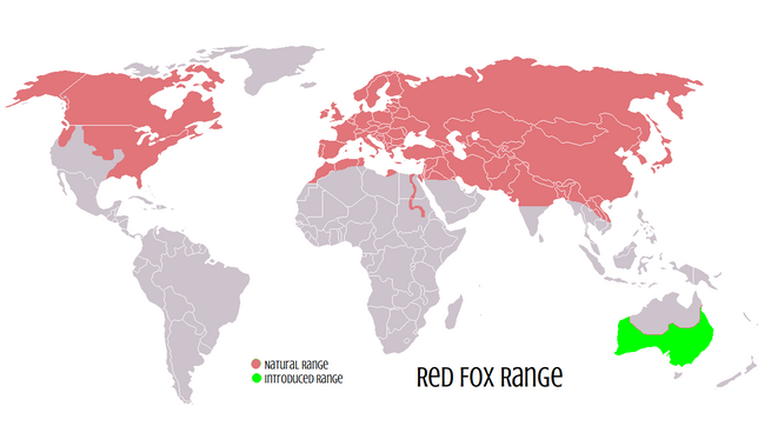 Diet: Red Foxes are unique since they are on almost every continent in the world and are extremely adaptable. In the wild, they would be omnivores, eating mice, plants, insects, and fruits and veggies if possible, so their diet must reflect this in captivity. They would prefer mostly meat. They do not have as specific diet restrictions in comparison to other foxes, so you can read more about a good diet on the 'Diet & Adopting' page.
Color Morphs: There are many more color morphs other than those listed below, these are just some of the common ones found on fur farms and ranches. Their gene code is listed if known

*Some images from www.eau.ee
Disclaimer
The materials available at this web site are for informational purposes only and not for the purpose of providing legal advice. You should contact your attorney to obtain advice with respect to any particular issue or problem. Use of and access to this website or any of the email links contained within the site do not create any endorsement, contract, or liability. You understand that by accessing information within this website you are not holding Faithful Foxes liable for any information contained within. You understand we are not responsible for any misinterpretation of this website, nor are we responsible for any issues that may arise upon reading it. Do not substitute online information for common sense or a Veterinary recommendation. The opinions expressed at or through this site are the opinions of the individual author and may not reflect the opinions of Faithful Foxes or it’s creator.
​
© 2008-2023 Wesley Kenyon