In captivity, they live for an average of 12 - 16 years, however, in the wild, it is a much shorter lifespan of 3 - 5 years.
This fox generally ranges from 4 - 10 pounds, and female foxes weigh about 15% less than the males. Closer to suburban and urban areas, the foxes tend to be smaller, while in rural areas only the largest survive due to their natural predators. Such predators include coyotes, wolves, bobcats, and predatory birds. Unfortunately, due the disappearance of many wolf populations, the coyote population has boomed, resulting in the desert Kit Fox dying out. In the past, large coyote populations were attempted to be vanquished by poison bait, which were killing out the Kit Foxes. This has since subsided and now the Kit Fox is coming back in numbers, as is it's cousin, the Swift Fox. It can also run up to 25 miles per hour, and uses it's large ears to hear prey underground.

Diet: This fox dines on almost any small mammal it can find, such as jackrabbits, mice, kangaroo rats, prairie dogs, birds, insects, and eggs of other animals. Urban Kit Foxes have been seen snacking on hot dogs and tacos. Being a desert animal, it has adapted by almost exclusively getting its liquid from its prey. It should be noted that when small mammals are not present and they survive on insects, the likelihood they will rear kits that season is extremely low.
In captivity, they should be fed a combination of a high quality dog food, such as Blue Buffalo kibble or Taste of the Wild and cooked or raw meats and veggies should be mixed in, although fruit can be added sparingly because of the high natural sugar. Treats such as crickets or mealworms can be added to the diet for stimulation. More info on their diet can be found on the 'Diet & Adopting' page.
In captivity, this fox is one of the easiest to litter or potty pad train, and will often bond to it's owners if spent time with since a kit. They tend to be submissive, getting low to the ground and flattening their ears while wagging their tails, for humans they have bonded to. They also tend to make squeaky submissive noises when seeing their owners, but it should be noted it is nowhere near the high decibel shrieks of a Fennec Fox. These animals will make use of a cat tree, but prefer cat condos and that give them the feel of an underground den, and they will still try to dig, so a sandbox or something similar is recommended if keeping them indoors. Remember to always use positive reinforcement rather than negative punishment. Foxes should never receive punishment or they will not trust you. Kit foxes tend to lose their baby teeth around 4 months old.
Unfortunately, most researchers believe that the San Joaquin Kit Fox will not be removed from the Endangered Species list anytime soon due to human development constantly shrinking their natural habitat.
Range: This species generally ranges from western Texas all the way to California and even as south as northern Mexico. It prefers desert areas, creosote flats, and sand dunes, but sometimes will adapt to the prairies of the central United States, overlapping the range of the Swift Fox. The Pinto Basin is the best known area for the most sightings of North America's smallest fox species. Generally, these foxes will be larger in urban areas due to a lack of natural predators such as coyotes. They have been know to adapt fairly well to changes in their environment, making dens out of construction pipes, urban planters, etc. 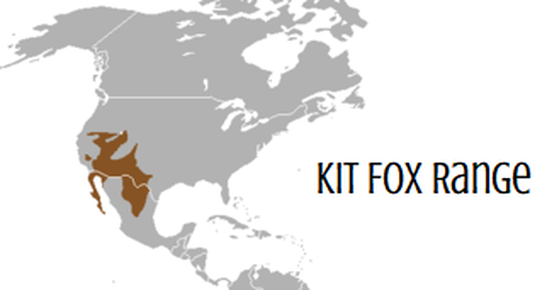 Disclaimer
The materials available at this web site are for informational purposes only and not for the purpose of providing legal advice. You should contact your attorney to obtain advice with respect to any particular issue or problem. Use of and access to this website or any of the email links contained within the site do not create any endorsement, contract, or liability. You understand that by accessing information within this website you are not holding Faithful Foxes liable for any information contained within. You understand we are not responsible for any misinterpretation of this website, nor are we responsible for any issues that may arise upon reading it. Do not substitute online information for common sense or a Veterinary recommendation. The opinions expressed at or through this site are the opinions of the individual author and may not reflect the opinions of Faithful Foxes or it’s creator.
​
© 2008-2023 Wesley Kenyon